The Life Blue Natura project continues its travelling exhibit throughout Andalusia in order to raise awareness on its initiatives, the importance of Blue Carbon and its role in climate change mitigation.
The exhibit took place in the Civic Centre of La Herradura (Almuñécar, Granada) from 26th September 2018 to 7th October 2018.

The exhibit “The Blue Carbon Trip”, one of Life Blue Natura Project´s initiatives, which will make a journey across 6 Andalusian provinces (Almería, Cádiz, Huelva, Granada, Málaga and Sevilla) throughout 2018 and 2019, travelled from  the province of Malaga (the First Forum of the Alborán Sea) to the province of Granada in order to take part in the Festival of the Sea, whose sixth edition was celebrated in La Herradura, Almuñecar.

The exhibit, which included multiple information and educational resources, demonstrated the importance of protecting Andalusia’s blue carbon sinks due to their extremely precious services, and showcased how financial means against climate change can strengthen their safeguard.
Through the exposition of biological samples, videos and posters explaining the structure of Life Blue Natura, the exhibit will continue its trip throughout Andalusia, promoting the project´s events coordinated alongside the Territorial Delegations for the Environment in each province. 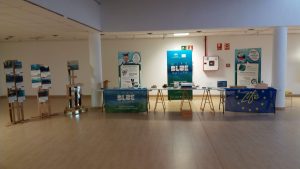 Along the exhibit, which was installed in the Civic Centre of La Herradura from 26th September, the project involved a talk on the 6th October and multiple participatory activities on the 5th and the 7th October.

The Festival of the Sea in La Herradura is an initiative promoted by the Association “Amigos de la Costa Tropical”. The program can be accessed here.